From Bitterness to Betterness: Anthony Ervin

One might compare his super swimming strength and resilience to a Spiderman series – humbly finding his strength, being rejected and turning away from his calling, only to return against all odds to celebrate a victory for the people.

In fact, he is a dude with Olympic swimming skills, a singer-songwriter and guitarist with his life story tattooed on his arms.

He represents Jewish, African-American and native American heritage. He has experienced alienation from schoolmates due to Tourette syndrome, which caused uncontrollable spasms. He has lived through rebellion and understands the family turmoil when his dad lost his job during the recession while his mom stayed at home in Santa Clarita to raise three kids.

“Things got better, and you know why? It was because of my swim team friends,” Ervin said.

Ervin’s humble spirit and compassion for others compelled him to find some way to help victims of the 2004 Tsunami.  He did what only a superhero would do. He willingly auctioned his prize possession, his 2000 Olympic gold medal, and unselfishly donated the proceeds to the relief effort.

Ervin recalls early SCV swimming at the Newhall Boys and Girls Club, the swim team at Hart High and Canyon Aquatics Club. Ervin met his best friends at age 8 on the swim team. He calls them “three amigos” to this day.  But it is Hart High coach Steve Neale whom Ervin credits for encouraging him to continue swimming.

“High school had a new life because of Coach Steve Neale. If it weren’t for him, I probably wouldn’t have made it to college swimming at all.  I revere and respect that man because he made swimming fun and enjoyable for me,” Ervin said.

Ervin recalls the moment he stood on the Olympic platform to receive his gold medal.

“As I stood there with the weight of that gold medal that I dreamed of, I did not expect it to come in the way that it came,” he said. “It was definitely more magical than I could have dreamed of on my own. But when I heard our National Anthem and I knew I had won one for Team USA, I knew it was all the people, my friends, my coaches, my teachers, up through high school and into college – it was all those people. I knew that song was playing for them.”

Ervin took an eight-year hibernation from swimming, but the Cal Bear returned to his place on the platform during the 2012 Olympics.  He gained two gold medals and one bronze at the 2012 SC World Championships in Turkey.

As of today, apparently, Ervin has regained his superhero swimming strength. Now 32, he is making a comeback, seizing eight medals during the current FINA World Championship tour:

Ervin also achieved a lifetime best time on Nov. 5 in the Silver 100m freestyle and claimed the fastest American time in the past decade.

Traveling all over the world, Ervin has made many friends but has not forgotten the SCV.  His superhero advice to kids:

“You can bounce yourself back farther than anyone could ever suspect or expect, even yourself. So go for it. Never give up. Make them dreams real.”

Gloria Locke is a Santa Clarita resident and producer of “SCV-Arts & Entertainment,” which airs Fridays and Sundays on SCVTV.  Article originally published at SCVNews.com.  You can view it at http://scvnews.com/2013/11/12/from-bitterness-to-betterness-anthony-ervin-commentary-by-gloria-locke/ 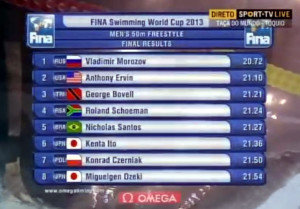